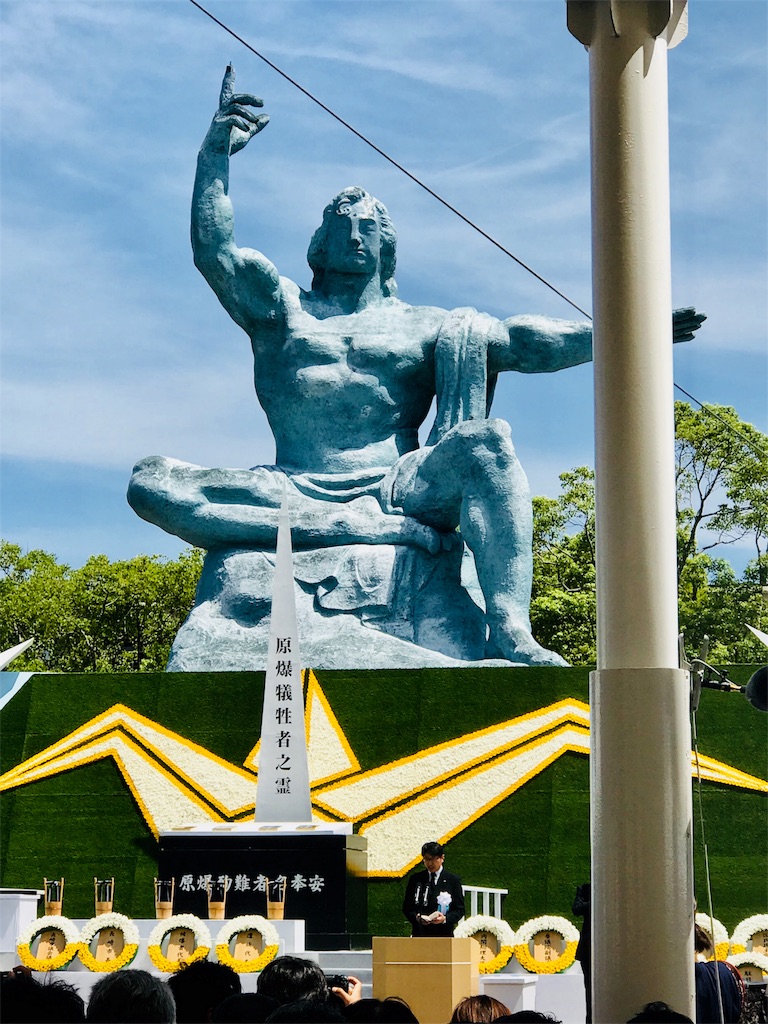 It was on this day 73 years ago, at 11:02 a.m. on August 9. The explosion of a single atomic bomb in the blue summer sky reduced the city of Nagasaki to a horrific state. Humans, animals, plants, trees and all other forms of life were scorched to ashes. Countless corpses lay scattered all around the annihilated streets. The corpses of people who had exhausted themselves searching for water bobbed up and down in the rivers, drifting until they reached the estuaries. 150,000 people were killed or wounded and those who somehow managed to survive suffered severe mental and physical wounds. To this day they continue to be afflicted by the aftereffects of radiation exposure.

Atomic bombs are cruel weapons that mercilessly take away from humans the dignity to live in a humane manner.

In 1946, the newly-founded United Nations made the elimination of nuclear weapons and other weapons of mass destruction the first resolution of its General Assembly. The Constitution of Japan, which was issued that same year, set pacifism as one of its unwavering pillars. These were strong expressions of determination to see that the tragedy of the atomic bombings experienced by Hiroshima and Nagasaki, along with the war that brought them on, would never be repeated. The fulfillment of this resolve was then entrusted to the future.

Continuous efforts to realize this resolve made by countries and individuals, most prominently the atomic bombing survivors, bore fruit last year when the United Nations adopted the Treaty on the Prohibition of Nuclear Weapons. Furthermore, the International Campaign to Abolish Nuclear Weapons (also known as ICAN), which greatly contributed to efforts that led to the adoption of this treaty, was then awarded the Nobel Peace Prize. These two developments are proof that the majority of people on this earth continue to seek the realization of a world free of nuclear weapons.

Even now, however, 73 years after the end of World War II, some 14,450 nuclear warheads exist in the world. Moreover, to the great concern of those in the atomic-bombed cities, a shift towards openly asserting that nuclear weapons are necessary and that their use could lead to increased military might is once again on the rise.

I hereby appeal to the leaders of nuclear-armed nations and nations dependent on the nuclear umbrella. Please do not forget the resolve of the first United Nations General Assembly Resolution to work towards the elimination of nuclear weapons. In addition, please fulfill the pledge made to the world 50 years ago in the Treaty on the Non-Proliferation of Nuclear Weapons (or NPT) to pursue nuclear disarmament in good faith. I strongly request that you change to security policies not dependent on nuclear weapons before humanity once again commits a mistake that would create even more atomic bombing victims.

To the people of the world, please demand that the governments and parliaments in your countries sign and ratify the Treaty on the Prohibition of Nuclear Weapons in order to see that this treaty comes into effect at the earliest possible date.

Currently, a new movement towards peace and denuclearization on the Korean Peninsula has emerged. We in the atomic-bombed cities watch this development attentively and have great expectations that persistent diplomatic efforts, as initiated with the Panmunjom Declaration by the leaders of North and South Korea and the first ever United States-North Korea Summit, will lead to the realization of irreversible denuclearization. I hope that the Japanese government will make use of this great opportunity to work towards the realization of a Northeast Asia Nuclear-Weapons-Free Zone that would see Japan and the entire Korean Peninsula denuclearized.

Last year, two of the hibakusha, or atomic bombing survivors, who led the anti-nuclear-weapons movement in Nagasaki for many years passed away in quick succession. One was Mr. Hideo Tsuchiyama, who had this to say about the leaders of countries that rely on nuclear weapons. “Your possession of nuclear weapons, or attempts to possess such weapons, is nothing to boast of. Rather, you should know that it is something shameful that risks making you perpetrators of crimes against humanity.” The second of these hibakusha, Mr. Sumiteru Taniguchi, spoke the following words. “Human beings and nuclear weapons cannot co-exist. The suffering we went through is more than enough. For people to truly live as human beings, we cannot allow a single nuclear weapon to remain on the face of the earth.” These two people harbored great worries that those who have never experienced war or atomic bombings might head down mistaken paths. With their passing, I feel anew the need to pass on to the next generation the war-renouncing message included in the Constitution of Japan.

There are many things that each and every one of us can do to help bring about the realization of a peaceful world. One is to visit the atomic-bombed cities in order to learn about history and the fearfulness of nuclear weapons. It is also important to listen to accounts of the wartime experiences of those in your own towns. While the experiences themselves are not things that can be shared, feelings of appreciation for peace may be shared by all. The campaign to collect ten-thousand signatures in support of the abolition of nuclear weapons, a project that originated in Nagasaki, started with a proposal made by high school students. The ideas and actions of the young generation have the power to create new movements. There are also people who continue to fold paper cranes and send them to the atomic-bombed cities. Through exchanges between people from different cultures and traditions we deepen our mutual understanding, which in turn can lead to peace. We can also make expressions of peace through our favorite music or sport. The foundations of peace are most certainly formed in civil society. Let us use the power of the civil society to spread throughout the world a culture of peace instead of one of war.

Seven years have now passed since the nuclear power plant accident that followed the Great East Japan Earthquake, yet the people of Fukushima are still suffering from the effects of radiation. Nagasaki continues to offer support to all those in Fukushima who are persevering with efforts aimed at rebuilding.

The average age of the hibakusha is now over 82. I ask that the Government of Japan improve efforts to provide support for survivors still suffering from the aftereffects of the bombings, and offer relief as soon as possible for those who experienced the bombings but have yet to receive official recognition as such.

While offering our heartfelt condolences to those who lost their lives in the atomic bombings, we citizens of Nagasaki hereby declare that we will continue to work tirelessly with people around the world to bring about everlasting peace and the realization of a world free of nuclear weapons. 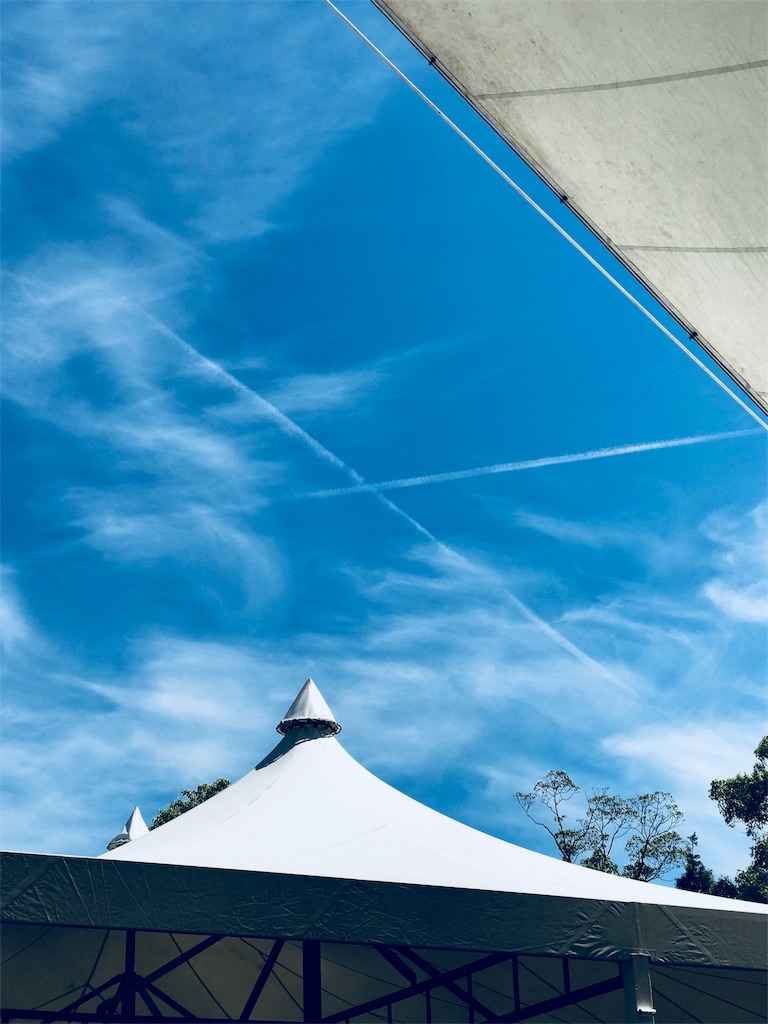 The holy cross in the blue summer sky.